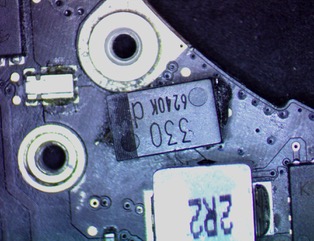 This is a very common issue on the 15in 2010 MacBook Pros (logic board number 820-2850), often mistakenly attributed to a failed GPU or graphics chip. In fact in most cases the issue is with a tantalum capacitor on the logic board (C9560) this capacitor often fails and causes a slight short to ground, so when the computer switches from the integrated (Intel HD Graphics) to the dedicated (NVIDIA GeForce GT 330M) GPU it causes a kernel panic. The solution is to replace the C9560 capacitor for a larger and more reliable polymer capacitor (extending the ground plane to allow fixation).

Symptoms unlikely to be caused by this issue

It is possible to negate some of the effects by using software such as GFX Switcher X to set the machine to only use the integrated GPU (Intel) rather than the dedicated one. However this is not a permanent fix, and eventually repair will need to be done.

This repair is done on a no-fix, no-fee basis (assuming the machine has the C9560 issue and no other faults).

We've carried out over 50 of these repairs as of September 2017, with a huge success rate.