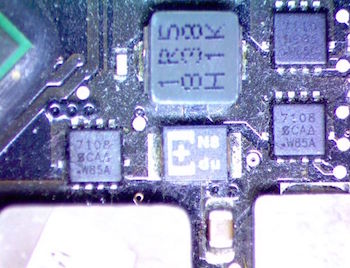 This service is to replace a faulty tantalum capacitor with a poly cap alternative.

This faulty capacitor was present on a number of 15in and 17in MacBook Pro Unibody machines made in 2008 and 2009. Not all machines in these ranges are prone to the fault, it is down to the logic board parts that were used. Specifically:

Determining if you have an affected board requires checking the logic board part number. But if you have a machine in one of these ranges that exhibits a no-power fault, there is a good chance it is suffering from the capacitor problem.

The fault exhibits as a no power fault. Sometimes if you get the machine hot (put it on a radiator) the machine will come back to life - this is sure sign the capacitor has failed.

The exact fault for those who can check, is that when shorted this cap shows 0.331v instead of 1.05v for the memory power rail. The cap leaks voltage to ground.

We replace the Tantalum C7771 capacitor with a larger Poly Cap version, and run a wire to connect it up.