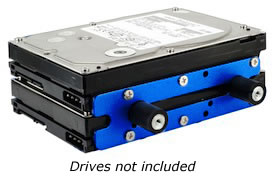 Stock Status: This product is out of stock.
Expected to ship within 5 working days

This is a bracket kit to allow additional 3.5" SATA drives to be added to the Mac Pro 2009 and later by using the optical (DVD) drive bay. The bracket fits into the lower optical bay, and with one 3.5" drive fitted it can be used along with an optical drive in the upper bay. It can take two 3.5" drives, but this does not give enough clearence for the upper bay and both optical drives have to be removed in this case.

This product is not suitable for the 2006 - 2008 models of Mac Pro, since they used an IDE rather than a SATA connector for their optical drive bays.