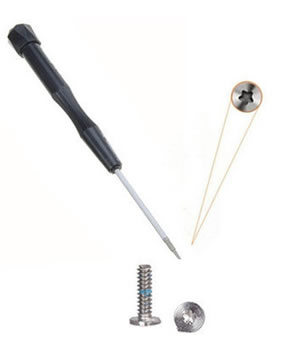 This is a screwdriver for 5 pointed "tamper resistant" Pentalobe screws. The Pentalobe type screws have been used in some Apple laptops. Most noticeably on the later MacBook Air models they are used externally and must be removed for drive replacement. They are also used on some MacBook Pro Retina models, and for a few internal screws on some standard MacBook Pros. Unlike on the MacBook Air, these screws do not need to be undone to replace the RAM or hard drive.

Note that some MacBook Airs prior to the late 2010 revision, that have had warranty work done on them by Apple, have had Phillips type screws replaced with Pentalobe type.